Orbex has let cameras into its working rocket factory in Scotland for the first time. The behind-the-scenes imagery reveals how the company is using advanced engineering techniques and materials to create the next generation of renewably-fuelled European orbital launch vehicles. The company also revealed its new Mission Control Centre that will be used to monitor orbital rocket launches from Scotland and other sites, as well as engine tests from its two propulsion test sites.

Orbex is headquartered in Forres, Scotland, and acquired the factory above to manufacture key elements of the vehicle and integrate the full system ready for launch. Once complete and tested, each vehicle will be moved in a single transportation container to the proposed vertical launch spaceport in Sutherland, or by sea to a second launch site being prepared in parallel. Each rocket weighs just 1.5 tonnes when being transported, about the same as a Mini.

Earlier this year, Orbex publicly unveiled the engineering prototype of its Stage 2 rocket, the stage that will transit into orbital flight after launch. Uniquely for a commercial rocket, Prime will use bio-propane, a clean-burning and completely renewable fuel that also reduces carbon emissions by 90 percent compared to standard kerosene-based rocket fuels. Prime rockets were designed from the beginning to leave no orbital debris and to be re-usable, using an innovative low mass concept to recover the main stage.

Founded by a team of five in 2015, Orbex has grown to more than fifty highly experienced team members today, with a strong focus on finding new solutions and allowing teams to innovate processes and toolsets. As one example, a small team reduced the iteration time between design variations for a key propulsion system from weeks to hours by creating a unique new design and simulation workflow.

At its Scottish factory, Orbex has installed several new production systems, including one of the largest carbon fibre winding machines in Europe. This 18-metre long machine automates the rapid weaving of intricate mixes of materials to build the main rocket structures. Orbex has worked for several years to investigate and perfect the carbon fibre blend used in the construction of its Prime rocket. Thanks to its choice of design and materials, Orbex Prime will be 30 percent lighter than similar sized rockets, allowing acceleration from 0 to 1,330 km/h in just 60 seconds.

Automated control of carbon fibre strands known as rovings allows Orbex to weave highly intricate mixes of materials to achieve the desired structural properties. Numerous characteristics, from the basic material properties to the angle of the stands all combine to ensure essential structures can tolerate large pressures - in some cases up to 500 times atmospheric pressure - as well as the intense dynamic loads of an orbital space launch vehicle.

Orbex has installed one of the largest high-speed automated carbon fibre winding machines in Europe in its Scottish factory, as well as a full size ‘autoclave’. This equipment allows engineers to have complete control over the design and pace of manufacture of all carbon fibre tanks, including the main stage tanks, which can be wound in a matter of hours. Orbex fuel tanks use specialized materials, including graphene, and specially developed processing techniques to ensure linerless compatibility with liquid oxygen.

Orbex has worked for several years to investigate and perfect the carbon fibre materials used in the coaxial-tank construction of Prime. This innovation, which cuts the launch vehicle mass by around 30%, has received strong support from the UK Space Agency's Spaceflight Programme and the European Horizon 2020 SME Instrument programme. Orbex is the first - and so far only - UK-based space launch company to win this degree of support.

Left: Trimming of pre-impregnated carbon fibre fabric and draping into a component mould. Numerous structural components on the Orbex launcher are built from carbon fibre, making them 50% lighter compared to traditional aerospace materials such as aluminium, and doubling their structural strength.

Right: Carbon fibre composites were first used for high strength components by Rolls Royce, and are today widely used at the elite levels of motor racing and in several aircraft and spacecraft applications.

Preparation of Rocket Structures for Space

To make large rocket structures and components ready for spaceflight, Orbex uses a full-scale ‘autoclave’ which uses high temperatures and up to seven times atmospheric pressure to help carbon fibre composites bond solidly. In just a few hours, these machines can process large rocket parts, such as main stage fuel tanks, to create a strong and reliable structure that is ready for the extremes of space. Some of these carbon fibre structures can tolerate massive pressures - in some cases up to 500 times atmospheric pressure. 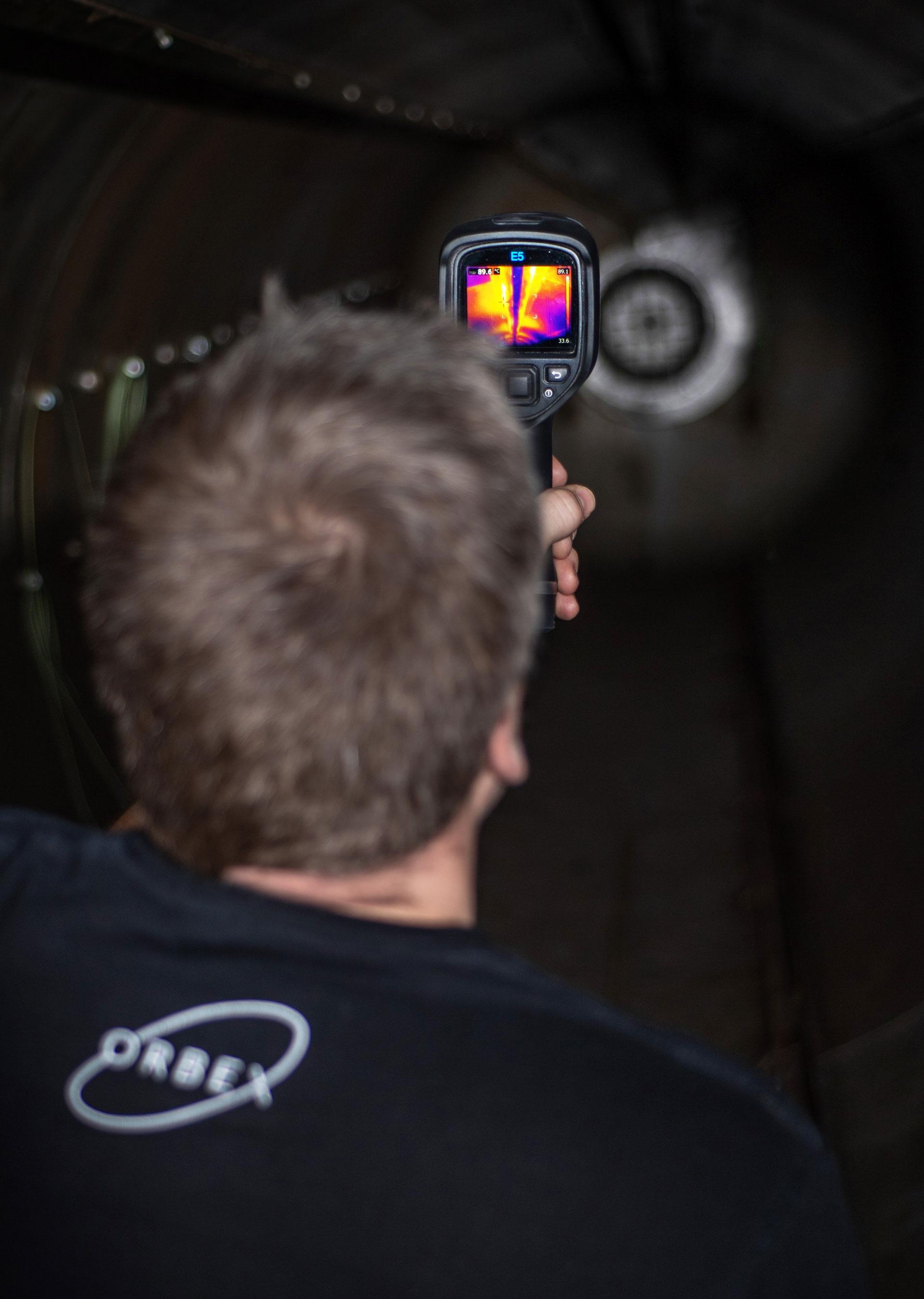 An engineer verifies the temperature inside the large-scale Orbex autoclave used to cure carbon fibre structures. Using high pressure and temperature, this industrial-scale autoclave, which weighs over 6 tonnes, will allow Orbex production staff to ‘cure’ all composite structures, including main stage tanks. In just a few hours, these machines can process large composite rocket parts to create a strong and reliable structure that is ready for the extremes of space

Earlier this year, Orbex revealed how it was using 3-D printing to create what are currently the world’s largest single-piece 3-D printed rocket engines. 3-D printing allows the integration of dozens of tiny design details and features without requiring additional processing time. Orbex is able to 3-D print a complete rocket engine in just five days.

Orbex’s 3-D printed rocket engine is uniquely manufactured in a single piece without joins. Given the extreme temperature and pressure fluctuations involved in space flight, this gives the engine an advantage over other rocket engines manufactured in two or three sections, which can suffer from weaknesses associated with joining and welding. Weighing just 7.5 kilos, this engine can lift 3.5 tonnes. While some launch solutions for small satellites require up to 200,000 kilos of fossil fuels, Prime needs just 4,000 kilos of fuel per launch, making it around fifty times more fuel efficient.

To reduce cost and increase speed of development, Orbex has worked closely with additive manufacturing partners to develop what are currently the world’s largest complete 3-D printed rocket engines. This new technology allows the integration of dozens of tiny design details and features without requiring additional processing time. Using this groundbreaking technology, Orbex is able to produce a complete engine in just 5 days.

Orbex rocket engines are fed their fuels by high performance turbo-pumps spinning at up to 25,000 RPM. This gearbox is part of a system that allows high speed testing and rotor balancing. The turbo-pump design exploits the properties of chilled bio-propane to create a highly innovative system that develops around 180 horsepower from a device the size of a grapefruit.

Flight computer and guidance sensors arranged in a full hardware simulator of the launch vehicle avionics. This system, known as the "flat sat", is directly connected to an engine mass simulation rig, and is used to develop the avionics, guidance, navigation and control system of the Prime launch vehicle. All the core avionics systems have been developed in-house at Orbex to be fully modular, low-mass and space-tolerant.

We’re creating rockets in a way that hasn’t been done before...The whole point of NewSpace - private enterprise getting involved in spaceflight - is to provide faster, better and cheaper access to space. Burning through hundreds of millions of dollars on robotic assembly lines or hundreds of staff to produce heavy, metal rockets is an antiquated approach. Building a modern space business means updating the manufacturing ethos to be faster, more agile and more flexible. That’s what we’re doing here at Orbex.

Orbex has also unveiled its new Mission Control Centre at its Forres site. From here, flight controllers will have access to numerous data streams from the launch vehicle during lift-off and flight, allowing complete remote command and control. Today, the Mission Control Centre is used to monitor engine tests and simulate flight operations. Orbex has two rocket engine test sites, one in Denmark and one at a secure location in the UK.

The heart of the launch operation is the Orbex Mission Control Centre, which allows flight controllers access to numerous data streams and communications with the launch vehicle during flight. Today the Mission Control Centre is used to monitor engine tests and simulate flight operations with launch vehicle guidance hardware in the loop, allowing teams to develop processes and safely stretch operational limits.

The Orbex Prime launcher is powered by six 3-D printed engines on the first stage and by a seventh vacuum-rated engine on the second stage. Orbex engineers have been running main stage propulsion tests since late 2016, focused on ensuring performance and reliability of the novel bio-propane-fueled engines. Orbex works in partnership with one of the world’s largest suppliers of propane and bio-propane, Calor Gas, who help ensure that fuel supplies are suitably ‘clean’ for rocket engines.

Prime is expected to be the first rocket to take off from the proposed spaceport in Sutherland. On August 1, 2019, Orbex’s partner, Highlands and Islands Enterprise (HIE) confirmed that it had signed a 75-year lease option with landowners, the Melness Crofters Estate, to build and operate a spaceport on its land. The designs for the spaceport, including the eco-friendly Launch Operations Control Centre have been released as part of a public consultation ahead of a formal planning request, expected before the end of 2019.

Situated on the northern tip of the UK near the Kyle of Tongue, the proposed Sutherland vertical launch spaceport will be Europe's first mainland orbital spaceport. The spaceport has been studied and designed with considerable care for the environment by a consortium that includes Orbex and regional development authority Highlands and Island Enterprise. Expected to be active by 2021, the site has been specified to precisely meet the requirements of the Prime launch vehicle.

The CEOs of Orbex and In-Space Missions conclude an agreement for the launch of the 80 kg Faraday-2B mission in 2022. Capable of launching payloads of up to 220kg to altitudes of 1250km, the Orbex Prime vehicle is designed to service the precise needs of the emerging small satellite market. With several launch contracts already announced for the early 2020s, the demand for an agile, reliable European smallsat launch solution has been clearly established.

Many satellites are now as small as a smartphone...Our goal is to service this new market by making smaller, more efficient launch vehicles with a tiny CO2 footprint and zero orbital debris. We want to eliminate waiting time by launching on a regular timetable, with massively reduced costs and a more agile, modular approach. We can only do that by re-thinking how we do it, rather than copying the past.